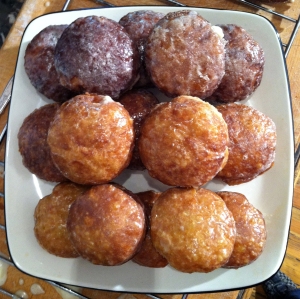 I’ve gotten a little obsessed with CRONUTS, the half-croissant/half-doughnut creation currently all the rage in New York and London, with lines around block from the wee hours of the morning just for one little Cronut (or two, apparently that’s the limit). The recipe for these astounding creations is very well guarded, and no one but the bakers know for sure. As a result, the craze has spawned many knock-offs and attempts at recreating the recipe. I spent days researching all the recipes online (I told you I was obsessed) and narrowed it down to the two best contenders, and made them both. Here are my reviews, notes and thoughts on how I might make it more “Cronut-y” next time…(though these were truly the best donuts I’ve ever had!)

I wound up making 3 batches from the two recipes I thought would be the closest match. (I had only planned on two, but I kinda screwed up one of them and so came the third). Fair warning, these things are super-time-suckers. (no wonder they are $5 each in NYC!) One recipe came from Food52.com (this recipe was definitely inferior for reasons I’ll explain later.) and a British recipe supposedly right from the baker that makes the famous London Cronuts. (This is the one I screwed up and made twice). Both recipes are infuriatingly vague (as corroborated by the scores of irate comments on their respective pages), I suspect on purpose, leaving us poor DIY’ers in tears, throwing wads of dough out the window. (don’t do that, it sticks to everything.) I did my best to fill in the holes in the recipes, but experience is the best teacher, and so I will continue to try and perfect the Elusive Cronut. I’ll go step by step through what I did, and what I’ll do differently next time.

On the plus side, this recipe is pretty cheap to make, even if you use organic ingredients like I did. (certainly a Hell of a lot cheaper than $5 a C’Nut.) 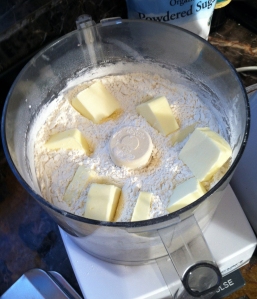 The Food52 recipe was pretty straightforward, just mixing up the ingredients without the butter, then chilling the dough. The Britt recipe was more complicated, and had one big fat problem. First, you were to combine the dry ingredients, then cut the butter into the flour (of course they did NOT tell you the butter has to be very COLD) You want decent bits of butter in there. The fatal flaw came when they told you to warm the milk and yeast, then add it to the mix. And guess what? It melted the butter of course, which negates the whole point of the chunky butter bits. Sigh. (this was  the “screw-up” recipe for that reason. I tried it again, this time mixing the milk/yeast mixture, and THEN the cold hard butter. Not much of an improvement but I went with it. What I’ll do Differently Next Time: Next time I’ll try letting the milk/yeast cool to room temp first before adding it to the butter-chunk dough, and quickly blending, mixing as little as possible to form the dough. At this point, all three doughs were treated the same, covered with plastic wrap and stuck in the fridge to chill for 30 minutes. 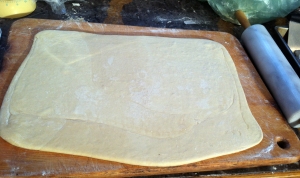 With both recipes, you are instructed to roll out the dough into a rectangle about 13 x 18, fold it over like a letter into thirds, and put back into the fridge to chill again. The exception is the Food52 Recipe in which you spread your room-temperature butter over the chilled dough. This step was a challenge, as the butter pulled up the dough, even chilled as it was, and I wound up ditching my pastry spatula for fingers. (and yes, I know my rectangles could use some work). At this point you are to put your letter-folded dough back in the fridge and chill again for at least 30 minutes. And take it out and roll and fold again. And then do that one more time. (for 4 total folding/chilling sessions. The final Chill Session is overnight, which I did. I will say the Britt recipe dough was more stiff and tough to roll. Vague-Alert: Neither of these recipes explained this folding and rolling process very well. I suspect there’s something missing… What I’ll do Differently Next Time: I’ll try letting the dough sit for a few minutes before rolling it out so I’m not having to push so hard. After my semi-failure at the end result, I researched how Croissant are made, and discovered that the dough is folded TWO times between chillings (once side to side, then turned 90 degrees, rolled again and folded the other way) This was not mentioned in either recipe, but I will do it next time. I will also try to make a better rectangle. I may also try separating the Britt recipe and doing the separate butter layer, just for comparison.

After a day of rolling and chilling, it’s time for the fun part. Frying! As per the suggestion of a couple commenters on the original recipes, I let the dough rise 1-2 hours out of the fridge before frying. Not sure that was necessary, or even a good idea in hind-sight, but here at a mile-high, I figured a little extra rise-time couldn’t hurt. Next time, I’ll try it without the extra rise-time and see how it goes. Also, I didn’t have a doughnut cutter, so I used a biscuit cutter. Next time I’ll spring for the doughnut cutter, as I suspect they would have come out a bit crispier with open middles, and a sharp edge to the cutter should help a lot, as I suspect I may have squished the edges of my dough too much with my dull biscuit cutter. That being said, they fried up perfectly. I kept a thermometer in the oil to keep it at 350, and I used grapeseed oil, as that is what the head honcho baker in NYC uses on his famous Cronuts. They all fried up very nicely, though I could tell by the weight the Food52 recipe yielded a heavier C’nut.

I wanted to keep the glaze and filling simple as to better judge the taste and texture of each recipe. I used a simple confectioner’s sugar glaze with no added flavor, and a simple french cream filling. I did not fill all the donuts (again for comparison sake), and some were simply rolled in a cinnamon/sugar mix right out of the fryer. Now for the best part, the taste test…

I cut one from each recipe in half. Right away I knew it was a failure as none of them had the tell-tale crispy layers. The closest one was the Britt recipe (the one I didn’t screw up), which had a little bit. The big winner for taste and texture was also the Britt recipe, hands down. Light, melt-in-your-mouth deliciousness. Seriously the best donut I’ve ever eaten. Whether they were glazed or filled or sugared, they were amazing. It was really really REALLY hard not to eat a ton of them. Everyone who tried them raved. My man must have eaten a half dozen (plus many “holes”). Even after he swore he would eat no more, I caught him sneaking down to the kitchen and pilfering another. The Food 52 recipe is good, just not great. A bit too dense and somehow just not as tasty. I’ll be sticking with the basic Britt Recipe, and experimenting with that one till I get it right. And then I’ll tell you how you can get them perfect, too, but in the meantime, I promise you will not be disappointed with this recipe!

Below is what I used, with a few changes I saw were needed as I made it. I translated the metric for you as well 🙂

Gently warm the milk and water on the stove (this only takes a minute, you should still be able to put your finger in it). Remove from the stove, add yeast, stir to dissolve, and set aside to cool. Combine salt, flour and sugar in food processor. Blend quick to mix. Add the COLD butter, cut into chunks, and pulse until the butter is well broken up but still in small bits. Add the egg to  the milk mixture, blend, then add the cooled milk/yeast/egg mixture to the flour/butter and quickly blend till it is just barely mixed in. Place in a bowl or on a baking sheet, cover with plastic wrap, and chill in the fridge 30-60 minutes. Take it out and move the dough to a well floured flat work surface. Roll out the dough till it is about a 13″ x 18″ rectangle, about 1/4″ thick. Fold in thirds from left to right, like a letter. Turn the dough 90 degrees, and roll out to a rectangle again, and fold in thirds again. Refrigerate for 30-60 minutes. REPEAT this step 3 more times (four total). After the final folding, refrigerate overnight. Remove from fridge, let rise 1-2 hours*, roll out one last time, and cut out dough with a donut cutter (you should get 12 cuts plus scraps). Let rise again 1-2 hours.* Heat clean grapeseed oil to 350 in a deep cast iron pot or deep fryer, and begin frying in batches, about 3 at a time, until golden brown and crispy, then turn and cook the other side. Carefully remove from oil, let cool a bit, and fill and or glaze however you like.**

* I am still experimenting with the rise times, and will update when I know more.

** I will also be trying out different glazes and fillings, and will report on those as well.

…and finally, don’t forget the best part, the scraps! Fry those up too.

I am just a hobbyist here, by no means a pro baker, so if you see somehting I should be doing differently, please let me know. If you are also working on your Cronuts, I’d love to hear about it! Tell me in the Leave a Reply/Comments section below.

Book a Tattoo with Me